This opinion piece originally appeared in NH Journal on November 29, 2022. By Samuel H. Norton. New England governors are clamoring for Energy Secretary Jennifer Granholm to support waivers to the Jones Act, a law requiring that cargo shipped between two U.S. ports be transported on vessels that are American-made, -built and -crewed, to “do […] This opinion piece originally appeared in DC Journal on October 18, 2022. By Peter Roff. Smart policies balance short-term considerations against long-term needs, even when they conflict. This is the case in Puerto Rico, where Hurricane Fiona made its presence known, dumping 30 inches of water in just a few hours, accompanied by high winds […]

What’s Going on in New England? This post was initially written on October 17, 2022. By Sam Norton. Yet another “targeted waiver” of the Jones Act was granted over the weekend; this time to allow US sourced LNG to be transshipped from the Dominican Republic to Puerto Rico. Free market champions will cheer this development as one more example of the failure […] This opinion piece originally appeared on Greater Houston Port Bureau’s website on July 22, 2022.  By Jennifer Carpenter. In June, we celebrate the anniversary of enactment of the Jones Act, the federal law requiring that vessels moving cargo between U.S. ports be American-owned, American-built, American-crewed. As the foundational law of American maritime, the Jones Act is […]

Cato Says The Darndest Things About The Jones Act… This opinion piece originally appeared in Medium on July 22, 2022.  By John D. McCown. Art Linkletter’s refrain on the mindless yet comical comments made by kids kept reverberating with me after reading something a few days ago in my email inbox. The object of my amusement was the July Jones Act Gazette from Cato […] This opinion piece originally appeared in The Daily Memphian on June 29, 2022.  By George Leavell. June marks the anniversary of the Jones Act, a critical maritime law requiring any vessel delivering cargo between U.S. ports must be owned and crewed by Americans and built in the United States. That makes this an especially significant […] 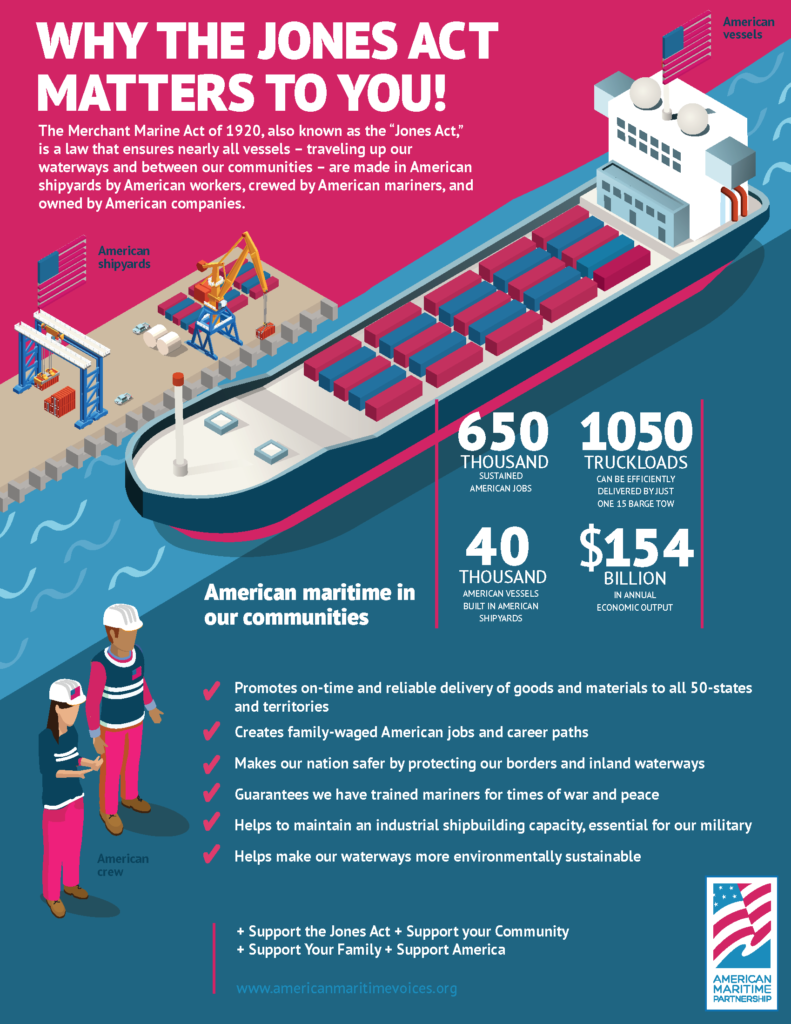 The Jones Act is also critical to our country’s economic security.  The 40,000 Jones Act vessels operating in the domestic trades support nearly 650,000 American jobs and $150 billion in annual economic impact.  An impressive five indirect jobs are created for every one direct maritime job, which results in more than $41 billion in labor […]